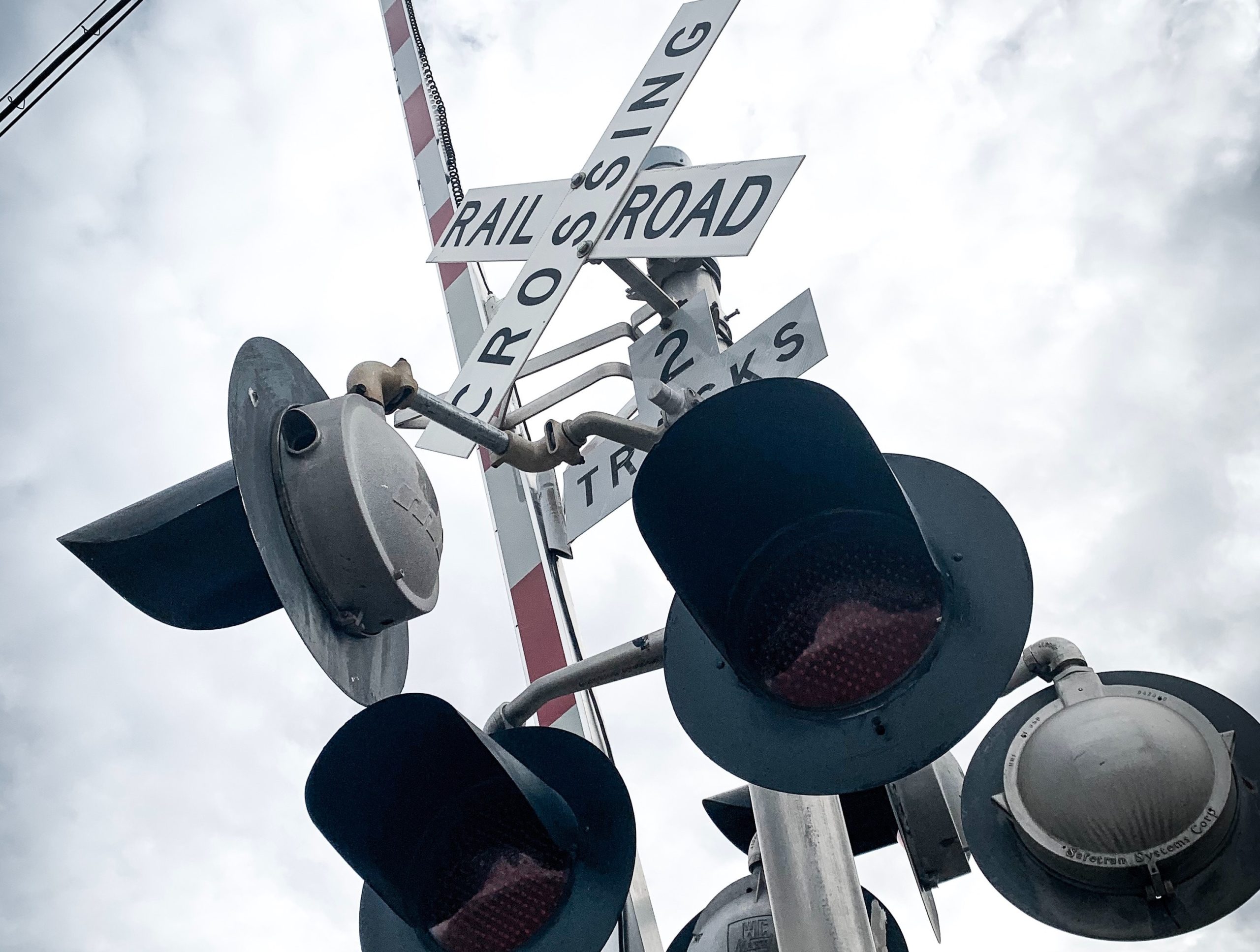 If you want to know how much traffic is delayed at rail crossings, you can create a traffic model or you can measure it directly. This may seem like an “either/or” situation but it is definitely not. Research finds that models can underestimate traffic delay at rail crossings by up to 700% [1]. That’s not a typo!

Okay, if models are so inaccurate, then why are they used? Why not use direct measurement all the time?

Major assumptions and errors made by traffic models

Most models assume the following:

These assumptions lead to fundamental flaws in most models, including two outlined below which cause the most errors:

To make matters worse, most models rely on the following data which is typically highly inaccurate:

Why are traffic models used?

Traffic models are a popular option for estimating traffic delays at rail crossings because they are quick, easy, and cheap. Most transportation professionals have modeling software, many of the modeling variables are readily available, and the time and effort to build a model is relatively low. However, these benefits come with a cost – poor accuracy.

The figure below illustrates the modeling approach. The model assumes a baseline travel time without a train (blue dashed line), introduces uniform through-moving trains at equal intervals throughout the day (yellow bars), models the change in travel time due to the train (black line), and estimates the delay as the difference between baseline travel time (red triangle). 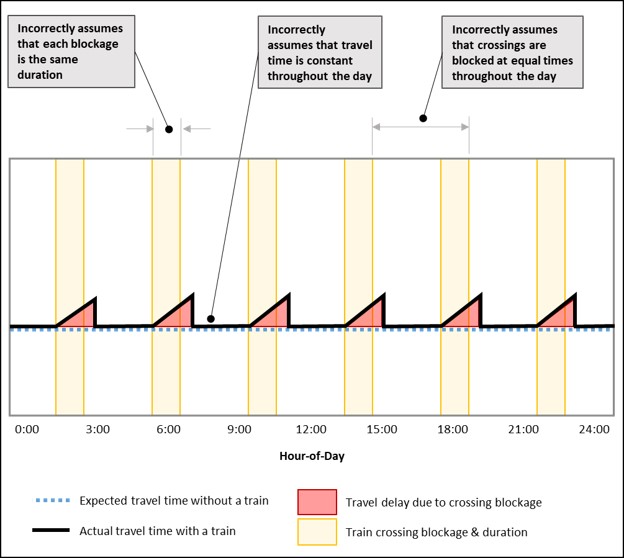 The measurement approach uses actual crossing blockage and traffic delay data to determine traffic delays at rail crossings. This approach removes the guesswork and provides accurate, reliable information. However, until now, this approach was rarely used due to a lack of data and effective analytical tools [3].

The main data challenges are obtaining detailed train movement data and collecting individual vehicle travel speed data along a corridor. Even with this data, the main analytical challenges include determining which vehicles were impacted by the train (and which were turning into McDonald’s to pick up a coffee, for example).

Two types of sensors and machine-learning algorithms are used to address these challenges.

Train detection sensors. TRAINFO’s new train detection sensors offer an easy, low-cost, reliable, and accurate option to determine exactly when a rail crossing is blocked. You don’t need approval from the railroad to install these sensors because they can be fixed to any pole on public property within 100 ft of the crossing.

Machine-learning algorithms. You would think that once you have detailed train and traffic data for individual vehicles it would be pretty straightforward to simply calculate traffic delay. Not so fast. Turns out there are some thorny details to resolve, including the McDonald’s example above and many more. These are complex issues that are too technical for this blog post. This is where machine-learning algorithms come into play.

Armed with train sensors, Bluetooth sensors, and machine-learning algorithms, it is possible to accurately measure traffic delay at rail crossings. Sensors continuously collect data and can be installed for several months or indefinitely. This addresses any seasonality effects and allows you to collect data across a wide road network. This data is wirelessly transmitted to the cloud where machine-learning algorithms calculate traffic delay in near real-time. Once you have this data, many types of performance metrics can be produced, including average vehicle-delay per blockage, total vehicle delay, average vehicle-delay per hour, etc.

The figure below illustrates the measurement approach. Compare this to the modeling illustration and the differences are obvious. For example, the measurement approach accounts for long train delays during peak traffic periods, captures the impact of back-to-back rail crossing blockages, minimizes the effect of trains during off-peak periods, and, as will be discussed in a later post, includes the full effect of traffic delays after the train clears the crossing. 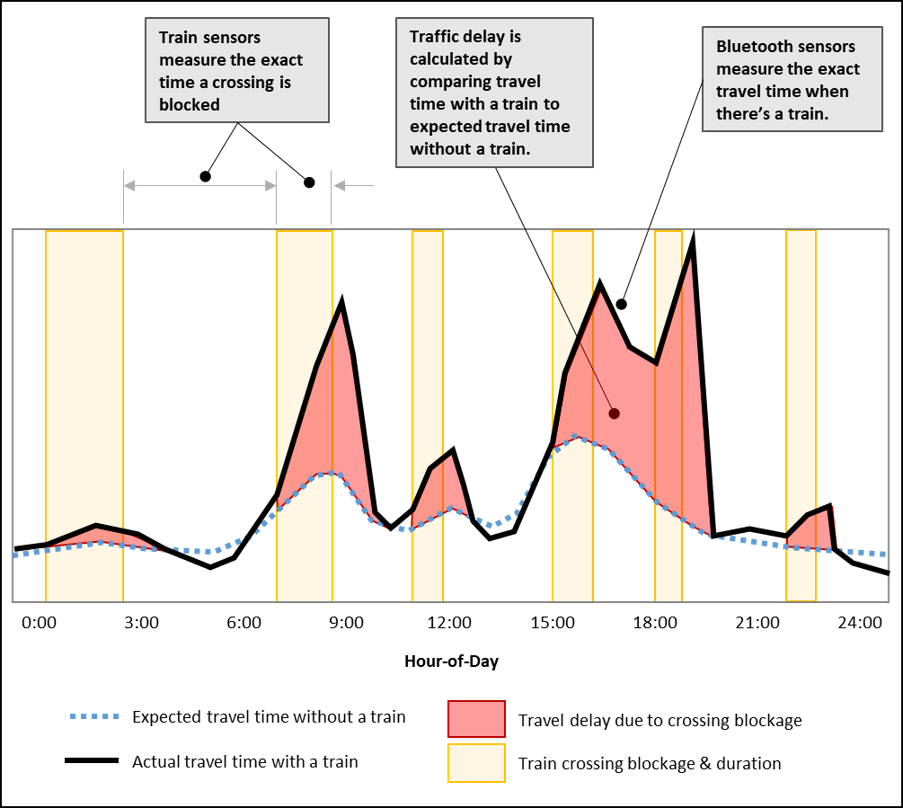 Why you should consider measuring traffic delay at rail crossings instead of modeling it.

The appeal of models includes speed, ease, and cost to estimate traffic delay; however, the downside includes relying on many incorrect assumptions that significantly affect accuracy. New technologies provide the ability to measure traffic delay at rail crossings with similar ease and cost as traffic models but with accuracies that are orders-of-magnitude better than modeling.

Why does this improved accuracy matter?

In my next post, I’ll provide a real-world example to demonstrate that these differences are not just conceptual but that they can significantly impact how you prioritize roadway projects and whether you receive millions of dollars in federal funding.

[1] G. Rempel, “Using ITS to Measure and Mitigate Traffic Congestion at Railroad Crossings,” in ITS America, Detroit, MI, 2018.